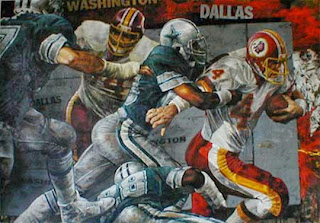 Dustin Copening, Darren Boyd and Jeff Bowers start the show by trying to place Week 5's instant classic where it ranks in greatest NFL regular season games of all time.

Was last Sunday's game lost due to the porous D, Romo's lack of clutch, or a flawed game plan? The guys break it down for you as only they can, including a fun game of "Spin or No Spin".

In the "Coach's Slant"; Dustin, Darren, and Bowers give their take on the Romo/Elway comparisons that have surfaced with Mike Shanahan in town this weekend. Then, Bowers breaks out his chalkboard and we hear from Coach Kiffin and Garrett.

As usual, Bowers will dive "Inside the Numbers" for the Sunday Night Football matchup, and we'll hear from Miles Austin, Terrance Williams, DeMarcus Ware, and RG III.

Everyone missed on Dallas covering the spread against Denver, but they all got it right with what really mattered, an L for the Boys. Who's willing to bet Dallas gets win number 3 in Week 6?

Finally, the guys discuss the NFC East games for the week, including their thoughts on when the Giants might consider dumping their HoF coach.