One of the Greatest Rivalries of All Time 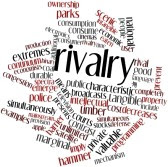 ﻿
Yankees vs Red Sox, Cowboys vs Redskins, Lakers vs Celtics. When two great and storied franchises meet and play for championships, the natural rivalry that grows between the cities and their fan bases is the stuff of legend. But perhaps one of the greatest rivalries in the world is one you may know nothing about at all.

Yesterday was the 188th meeting of two of the most dominate teams in their sport: Liverpool FC and Manchester United of the English Premier League in soccer. 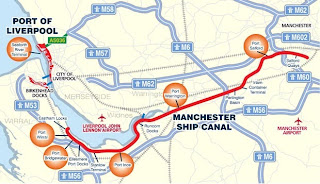 The rivalry traces its roots way back to its very first meeting in 1894. You see, in those days the cities of Manchester and Liverpool were thriving centers of commerce during the Industrial Revolution. Manchester was known for its manufacturing and Liverpool for its port and shipping empire, an expensive and frustrating annoyance to the business people of Manchester. However, in the year 1894, the Manchester Shipping Canal was built, the largest man-made canal in the world at the time. This allowed ships to bypass Liverpool and their merchant dues and go directly to the factories in Manchester. The loss of dues in Liverpool led to a loss of jobs and from the great discontent in the people of Liverpool and Manchester brought forth a heated and delicious rivalry. In fact, the original crest of Manchester United's football club includes a ship in homage to the birth of this rivalry. 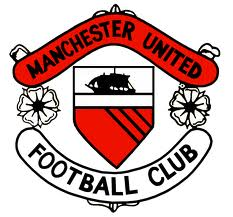 As the years progressed, the rivalry grew, not only due to the proximity of the two cities (separated by only 27 miles) but also because both teams were good. Really good. The two teams combined have won over 121 trophies (59 for Liverpool, 62 for Man U) and Manchester United finally surpassed Liverpool's 18 League titles in the past 2 years, capturing their 19th and 20th championships. Both teams claim the title as "Greatest English Football Club." 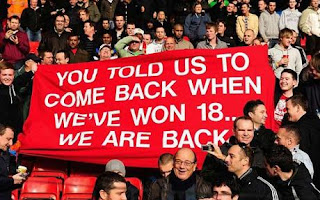 Liverpool's dominance came in the 1970's and 80's, winning 11 league titles and 4 European cups in that time, but they have struggled over the past few years due to some bad ownership issues (mainly that of former Rangers owner Tom Hicks). Meanwhile, Manchester United has dominated the 90's and into the 2000's, with 12 league titles and 3 European Cups. 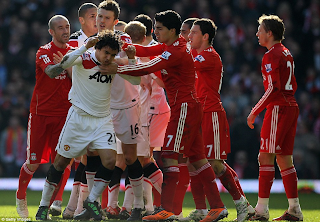 And with winning comes passionate fans! These two clubs are among the biggest earning and most widely supported teams in the world. The infamous "hooligan" seems to have sprung forth from this rivalry as well. Incidents including the hurling of eggs, pennies and human excrement at players and coaches are not uncommon in this series, and even one incident where the Liverpool fans attacked an ambulance holding a United player who had broken his leg in 2006. In fact, the reason that the games are held only at noon now (7:30AM CDT) is in order to deter heavy drinking by the fans prior to the match. 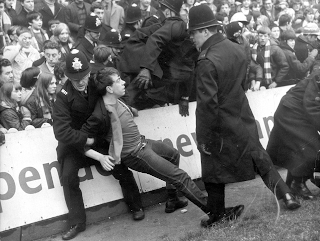 Yesterday's unlikely 1-0 win over Manchester United has the boys of Anfield thinking of a return to glory days for Liverpool, but don't expect the Red Devils to go away so easily. The next clash of these two titans occurs on March 15th at historic Old Trafford. So do yourself a favor, set a reminder on your phone to set the DVR, grab yourself a nice big cup of coffee and allow yourself to get swept up in the pageantry, history and passion of one of the truly great rivalries in all of sports. 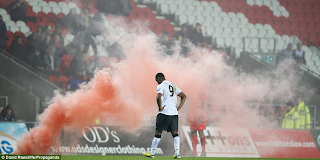