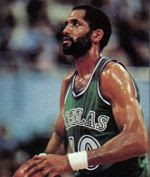 It has been a quick and graceless fall for the Dallas Mavericks since they shocked the Big Three and the world in the summer of 2011. Only Dirk Nowitzki and Shawn Marion remain from the roster that won the NBA Championship, and there is a chance that Dirk is the only holdover left standing come Opening Night 2013.


Mark Cuban has promised that he and Donnie Nelson will put a title contending team together over the next two years. It’s hard to be that optimistic considering the flop that was the Deron Williams courtship last summer, but the Mavs front office delivered the ultimate prize before when the Dirk window appeared shut.
Before I complete this study on free agents that I think (or at the very least would like to see) the Dallas Mavericks target, I warn you all to be prepared for the start of Free Agency Silly Season. On Friday it was reported that Dwight Howard was seen house shopping in Houston, only to have that report swatted out to half court moments later. It was the first in what’s sure to be many claims to the whereabouts of D12, and which team he’s leaning towards signing with. Don’t get sucked in one way or the other.


1) Dwight Howard - There’s a group of Mavs fans that want nothing to do with the big fella. He burned bridges in Orlando for a chance to play on a dream team under the bright lights, and now he appears set to leave LA with all the overpasses ablaze for a second time. Howard’s behavior is erratic enough to rattle the foundation of even the most optimistic of folks, but his talent makes him unlike any other big man to hit the open market in recent memory.


In a down year, Howard still managed to score 17.7 ppg and lead the league in rebounds at 12.4 per. No Maverick center has come close to putting up numbers like that since Roy Tarpley’s ill fated swim through Dallas.


Dallas is going to go all-in for Dwight, and nothing is going to change their minds. I’ve gone on record as an anti-D12 guy in the past, but after a 41-41 season filled with apathy you could probably sell me on the idea of cloning Tarpley and sticking him on the court for 2013-14. Rick Carlisle could do wonders with either.


2) Nikola Pekovic - It’s the biggest test to Mark Cuban’s declaration that Dallas wants nothing to do with restricted free agents this summer. The Timberwolves are expecting Pekovic to get a solid offer from someone, possibly the Trail Blazers in retribution for Minnesota driving up the price on Nicolas Batum last year.


The decision Cuban and Donnie Nelson must make on pursuing Pekovic is if they are willing to offer enough to force the T-Wolves to let him walk. The Mavs believed they had done just that with Orlando’s Marcin Gortat in the 2010 off season, only to see the Magic match their offer at the last minute. To be clear, it will take a healthy sum to try and secure Pekovic’s rights (some guess as much as $12 million per season), but it’s a safe bet he’s worth the money.


3) Andrew Bynum - When the Philadelphia 76ers acquired Bynum as part of the Dwight Howard to LA trade, they thought they had their cornerstone at center for years to come. Unfortunately for them, Bynum’s knee did not cooperate with their plans. Philly may attempt to bring him back, but it’s not likely. Bynum is easily the most perplexing option on the free agent market.


In 2011-12, Bynum had his best season as a pro, averaging 18.7 pts, 11.8 trd, and 1.9 blk per game. He also had a career high 22.9 PER. The promise of high powered production is undercut by the chronic knee problems that have haunted his career. The laundry list of maladies have led to arthritis in the left and right knee, and he had both knees scoped once again in March.


Bynum’s agent David Lee claims that there’s, “not a concern in the world,” that his client will be ready for training camp; however, not too many GM’s are going to be sold on his assurances alone.


The Mavs won’t bother if someone out there is crazy enough to fork over a max contract, but one year (or maybe two) of max money might be viewed by the organization as a fair balance of risk and reward.


4) Al Jefferson - Jefferson’s fate is tied to where Dwight Howard ends up landing, and how many teams will be willing to gamble on the balky knees of Andrew Bynum. If Howard sign with Dallas, then the Rockets would presumably turn their attention to Jefferson, and vice versa. If Bynum gets an absurd offer, then Jefferson is the most attractive unrestricted player remaining.


His scoring punch isn’t quite the same as Howard’s, and his defensive presence is surprisingly lacking for his 6’10” and 265 lbs frame. Since he grabbed 11 trb per game over a three year period from 2006-07 to 2008-09, that total has dropped to 9.4 per over the following four seasons. Of course Pekovic (2nd on the list) is also down the list on defensive metrics, but Jefferson will command a higher salary (probably just short of max money).


Unless someone jumps the gun with a max deal out of the shoot, my bet is Jefferson remains on the market long enough to get a conversation with Dallas if they miss on Howard.


5) Timofey Mozgov - He’s not going to be talked about much on sports radio around town, but the 7’1” Russian is drawing some comparisons to the Rockets Omer Asik. Asik averaged 2.9 pts, 4.4 trb, and 13.2 minutes per game in his first two years in the association. Then Houston gave him a chance to start a full 82 game season, along with a healthy 3 year $25 million deal. Asik rewarded the Rockets front office with a 10.1 pts and 11.7 trb per game performance.


I wouldn’t expect Mozgov to get anywhere near the money Asik received from the Rockets, but somewhere from $12-16 million for three should get the job done.


Poll Question: Will Andrew Bynum Ever Play Another Full Season In The NBA?
Posted by Unknown at 9:14 PM