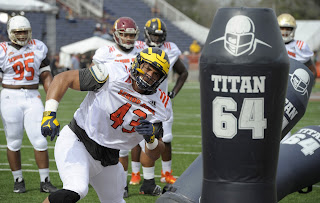 The Senior Bowl in Mobile, AL always serves as the unofficial kickoff to the 2017 NFL Draft season. With all but 2 teams through playing and most front office staffs in place, the Senior Bowl is a showcase of some of the top talent in the 2017 draft class. Here is a full recap of the week of practices and the game, divided up into offense and defense.

The defensive end group at this year’s Senior Bowl were the best top to bottom in Mobile. In fact the only reason Keionta Davis got the Stock Down designation is because he only held his current evaluation instead of improving upon it. Perhaps no single player helped himself more than Chris Wormley of Michigan and more off the field than on. Reports suggest Wormley aced all of his team interviews and receives raves from the Bears staff. A classic 3-4 DE, Wormley might be in contention for a 1st round pick. Other top DEs Jordan Willis of K State and Dawuane Smoot of Illinois played up to their 1st-2nd round grades as well. The surprise of the group was Ohio DE Tarrell Basham, who rose from an intriguing mid-rounder into a Top 50 player. Basham looks like a 280lbs DE but moves like his 6’3” 259lbs would suggest. The other prospects include Daeshon Hall of A&M and Isaac Rochell of Notre Dame, who were as advertised, and Tanoh Kpassagnon of Villanova, who showed a lot of potential.

Last year’s Senior Bowl class at DTs had way more star power than this year, featuring several Day 1 and 2 choices. The 2017 Senior Bowl class of DTs is a solid group but does lack that the star power. A perfect example of that is the prospect that helped himself the most in Mobile was mostly a backup in college, Dalvin Tomlinson of Alabama. Being a backup on the Bama DL is far from a knock, but Tomlinson capitalized on his chance to shine, both as a run stuffer and in the team interviews, making him a solid Day 2 choice. The other, more high profile DTs, including Carlos Watkins of Clemson, Stevie Tu’ikolovatu of USC and Ryan Glasgow of Michigan, all played well and held their grades. The surprise of the week came from Larry Ogunjobi of Charlotte, who is built like a dump truck and was about as immovable. Ogunjobi drew many comparisons to Javon Hargrave of the Steelers in his rise through the draft process from small school to mid-rounds.

With both teams featuring a 3-4 defense at the Senior Bowl (Browns and Bears), the Outside Linebacker spot was at a premium and got a lot of exposure. For some that exposure was good, like Vince Biegel of Wisconsin who flew around in the backfield and downfield covering backs and tight ends. For some it was less good, like Ryan Anderson of Alabama who still held up well on the line but really struggled in coverage. The surprise of the week came from Derek Rivers of Youngstown who towered over the competition in both size (6’5” 255lbs) and in drills. Rivers showed both strength and speed on the outside and could be a real steal as a 3-4 OLB in the pros.

Perhaps no single player raised his stock more than Haason Reddick of Temple. Though he was a pass rusher primarily in college, Reddick made the transition to stand up ILB seamlessly and also aced his interviews. It is possible Reddick could even make his way into the late 1st or early 2nd round. Also showing promise was Alex Anzalone of Florida, who was starting over much heralded Jarrad Davis before getting injured. Most of the other LBs had their limitations, including small school prospects Connor Harris of Lindenwood and Jordan Herdman of Simon Frasier, who struggled at times with the speed of the competition; or Ben Gedeon of Michigan, Ben Boulware of Clemson and Harvey Langi of BYU that struggled with their own speed in space. The most intriguing prospect of this group was Duke Riley of LSU with his ability to cover. Much like fellow LSU and 2016 Senior Bowl alum Deion Jones last year, Riley could find himself starting very soon.

This group of corners all had a very up and down week and opinions varied the most among scouts. High profile guys like Desmond King of Iowa and Jourdan Lewis of Michigan did well but also showed some warts at times. Tre’Davious White of LSU was doing very well but then pulled out of the week with a hamstring pull. Though he actually played more slot cover safety than corner, Cameron Sutton of Tennessee did as good a job as any versus some impressive TEs after coming off an injury plagued senior season. Most of the other corners played to their Day 3 grades with the exception of Rasul Douglas of West Virginia. The 6’2” 203lbs CB struggled at times in press coverage but his size and ball skills will definitely intrigue some team.


A couple of safeties caused a lot of buzz among the scouting community at the Senior Bowl: Obi Melifonwu of UConn and John Johnson of Boston College. Melifonwu impressed from the weigh in (6’4” 219lbs) to the field, drawing comparisons to Kam Chancellor. Johnson came in much less heralded but continually impressed on the practice field. Meanwhile, Justin Evans of Texas A&M and Jordan Sterns of OK State also played well for the South squad, though didn’t really improve their stock over its current 2nd and 3rd round grades respectively. The surprise of the group was the same surprise player of last week: Lorenzo Jerome of St Francis (PA). Jerome had 2 INTs in the NFLPA Bowl then followed it up with 2 INTs in the Senior Bowl. Though perhaps not the biggest or fastest guy on the field, that kind of knack for the football displayed by Jerome is so coveted by NFL teams.
Posted by Unknown at 9:52 PM