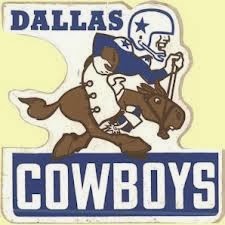 As the Cowboys attempt to build a championship team in 2017, there are many very core questions they must answer along the way. The headlines, of course, will all be centered around the quarterback position and the future of Tony Romo. Personally I think they will have to release Romo with a June 1st designation thereby clearing a lot of cap space for the future as I don’t believe he would or could pass a physical for another team in a trade.
However, there are many other questions yet to be answered for this Cowboys team. Here is an in-depth look at the top 5 facing the Cowboys this offseason.

One of the most underrated and under-appreciated aspects of successful teams are adapting their scheme for the talent on hand. The Patriots have made a dynasty by this; morphing their defensive philosophies and schemes (4-3, 3-4 hybrid, 3-3-5, zone, press man, etc) based on the players versus trying to make their players fit a scheme. Most coaches in the NFL have the scheme they are most comfortable with and will stick with said scheme even when the talent in place may not be ideal (ex. Jacksonville Jaguars defense under Gus Bradley). That brings us back to the Dallas Cowboys.
Traditionally, Rod Marinelli was brought up in the base 4-3 Tampa 2 defense. That is a primarily zone coverage system designed to opposing teams to take chances into the seams of the zone and creates turnovers with ball awareness and hard hits in the secondary. 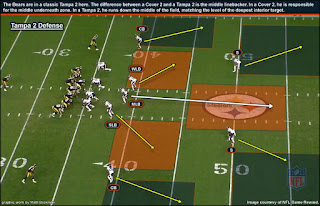 However, due to the nature of today’s pass-happy NFL, Marinelli has evolved into using a base 4-2-5 nickel package for far exceeding 50% of most defensive plays. In addition, last season (with credit of insistence going to LB coach Matt Eberflus) the Cowboys employed much more man-to-man coverage in the secondary. This played much better to the strengths of starting corners Mo Claiborne and Brandon Carr, who had shown some struggles in zone coverages, and resulted in banner years for the two pending free agents. And therein is the rub.
With 3/5 of their starting secondary free agents (Claiborne, Carr and S Barry Church) and relatively tight to the cap, the Cowboys must have a clear vision for the future of their secondary and its scheme. Returning CB Orlando Scandrick has shown his versatility in either scheme but rookie Anthony Brown showed some weakness in strict man-to-man and might be better served in more zone packages. In addition, starting FS Byron Jones does have experience at corner from college at UConn but would also be better served in zone packages on the outside.
So the question is: Should the Cowboys continue to play more man coverage as in 2016 and acquire or retain talent to that end or change back to their tendencies of 2014-15 and play more zone, using pieces in place and supplementing in free agency or the draft. That answer will become apparent based on their moves in free agency prior to the draft on April 27. But if they fail to answer this question internally, it could lead to some mismatched talent and struggles in the season ahead.

In 2016, getting 16 games from Sean Lee was a Godsend and lead, in large part, to the improved defense last season. Partnered with Lee was a rotating cast of Anthony Hitchens, Justin Durant, Damien Wilson and others that were average at best. In looking ahead to next season, the Cowboys will need to assess and ensure the future at this spot. In last year’s draft, the Cowboys bought a lottery ticket in the 2nd round named Jaylon Smith out of Notre Dame. If fully healthy, Smith would have been a Top 5 pick and is one of the best LBs I’ve ever scouted in 10 years. However, the knee injury suffered in the Fiesta Bowl that resulted in nerve damage can be very slow to heal and has ended many careers before they began. 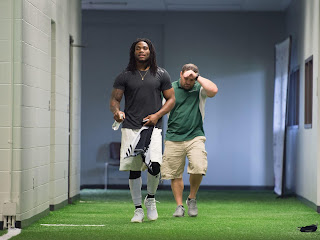 If Smith can return to health in 2017, he and Sean Lee are easily a top 5 linebacking core in the league and will be a strength of the club. However, if Smith cannot regain his college form and/or Lee is beset by more injuries then the Cowboys will have problems. With limited resources to invest in the position, the progress of Jaylon Smith’s return should be a key factor in the Cowboys offseason model.

Ever since the release of DeMarcus Ware, the Cowboys have struggled to find a consistent pass rush from their defensive line. Many resources have been spent, from money to draft picks to reputatuion (Greg Hardy), in pursuit of this answer and still it remains an issue. With Randy Gregory gone until Jan of 2018 (at least) due to drug suspension, the Cowboys currently have injured Demarcus Lawrence (off-season back surgery) and Benson Mayowa (pass rush specialist only) as starting DEs, with hybrid DE/DT Tyrone Crawford and David Irving and unproven Charles Tapper and Ryan Davis in reserve. This is likely to be addressed early in the draft, but rookie pass rushers rarely provide more than 8 sacks in their first season and no one in the above group had more than 6. On the interior of the line, 3rd round pick Maliek Collins was a surprise hit, totaling 5 sacks at the 3 technique. But his starting counterpart, Terrell McClain, is a free agent and unlikely to return. With utility DL Jack Crawford also free, Cedric Thornton is the only other returning DT. 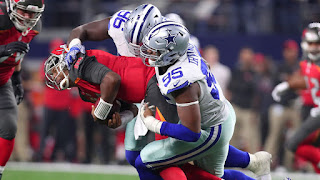 The biggest question facing this group is finding the best use of the talent available and then supplementing with priority free agents and draft picks. Are David Irving and Tyrone Crawford better at End, at Tackle or both? Is Lawrence a RDE and can he stay healthy?
In addition to these questions, the end of the Cowboys season and Super Bowl 51 provide another interesting perspective into the mix. Both Dallas and Atlanta subscribe to the current trend of the smaller and faster defenses. And yet both squads wore down in the playoffs and proved the team’s Achilles heel. Will the Cowboys have enough “beef” along the defensive line to hold up against better running teams or sustained attacks?

On its face, this question may seem preposterous to the casual fan. An offense that boasts the league’s leading rusher, a future HOF tight end, the 4th highest paid wide receiver currently and loose squirrel of a slot receiver hardly seems in need of help. And yet Dallas finished in the bottom 5 on passes over 20 yards and seemed to bog down at times versus good press defenses. In addition both WRs that started opposite of Dez, Terrance Williams and Bryce Butler, are free agents. But with so much money already invested on the offensive side, can the Cowboys afford to put more assets on that side of the ball? 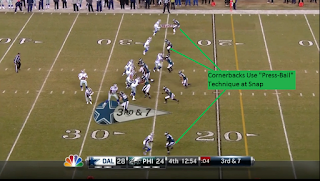 What is likely to occur is the Cowboys will look at a veteran in free agency that comes with a bargain price tag. This may include retaining Bryce Butler or perhaps someone like Pierre Garcon or Victor Cruz. While this maintains the status quo or perhaps slightly improves it, moves such as these would not address the issues above or help dispel the “book” on how to defend the Cowboys (more on that in question 5). This year’s draft is very rich in #2 wide receivers to be had in rounds 2 and 3 and perhaps should be a higher priority on draft weekend than one would think. Once again, the pursuits in free agency should reveal their intentions starting in March.

When a team has success on offense in the NFL, other defensive coordinators begin to study film in order to find out how to stop that offense. This process usually takes around 10-15 games roughly and then takes a team with the talent to implement such a gameplan. I perfect example of this is the 2015 Carolina Panthers, who went 15-1 in the regular season but just started to show flaws in the final weeks of the regular season. Those flaws came in the form of weakness at the OT spots to speedy edge rushers and proved their undoing in Super Bowl 50 by the Broncos. In 2016 having not upgraded their OT position, they faced an onslaught at that same weakness and went 6-10.
The Cowboys in 2016 went 13-3, losing only a meaningless game to the Eagles and both matchups to the Giants. The Giants showed the rest of the league “the book” on how to beat Dallas: Press man coverage on the outside and big bodies at DT in their 4-3 to plug up their zone runs. The other team in the NFL to emulate this strategy was the Minnesota Vikings and they almost beat Dallas as well if not for their complete ineptitude on offense. 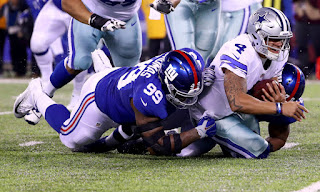 This is in no way a slight to the Cowboys as every team in the NFL has their strategic weaknesses and thus “a book” on how to best defeat them. In fact it is a great compliment to the Cowboys to have weaknesses that demand so much from an opposing team’s defense. However, the weakness is still present and one of the key elements to any offseason for an organization should be to identify and address those areas head on.
The first area to address can be at the QB spot where young Dak Prescott must continue to improve his game. Most of his issues lie in consistency of mechanics, especially in vertical throws outside of the hash marks. It is this area that scout’s noted coming from college and what had him slide in the draft last season. But with more coaching and work, this area can improve.
Secondly, the wide receivers (and most importantly Dez) must work harder to beat press coverage. This is an area Dez has struggled with since he was a rookie and why he can be taken out of games by opposing defenses. Further, Beasley’s size also lends him to be manhandled in man coverage and he must be protected with motion or slot positions. Finally the 3rd WR spot could help in this area by finding a burner who stretches defenses vertically and persuades coordinators to not gamble with him versus their #2 or #3 corner.
Finally, the zone blocking scheme of the run game paired with Zeke Elliot must be a bit more versatile at times. When facing a stout gap control front such as the Giants (or what the Packers did in the playoff game), the Cowboys must attack the edges more. That can be accomplished with sweeps, bubble screens, spread option or many other ways. The fallacy that Dallas faced in the playoff game last year was the arrogance of success doing it their way. While good teams don’t change their identity based on the opponent, they also don’t walk in expecting to do the same old thing and win in the postseason. 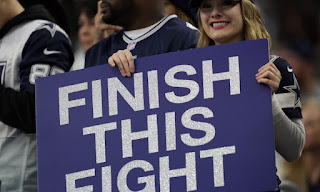 Conclusion
The Cowboys have a number of needs in this off season including: CB (2), DE, S, WR, DT, TE, OT


How they address these needs in March and April will determine if they are playing in February 2018. Championship components can come in many varied forms, from the 4th round compensatory pick to a bargain free agent signed in August. That is why the NFL is a 365 days a year sport and why America loves it so much.
Posted by Unknown at 7:21 PM