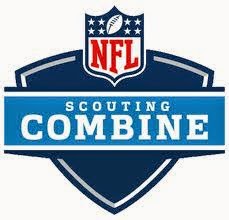 Every year in the last week of February, the NFL world descends on Indianapolis for the NFL Scouting Combine. As 330 prospects are invited to get measured, tested and interviewed, the Combine serves as the biggest job interview for these NFL hopefuls and the last big event for teams before the start of free agency on March 9th. With only 255 picks total in the 2017 NFL Draft, it may be surprising to hear that only 80.8% of draft picks come from the Combine invitees since 2007 (the Cowboys come in just under that average at 77.5%). Nevertheless, the vast majority of these players will get drafted or signed as free agents and therefore are critical to the constructing of a Super Bowl Champion.
In this year’s Combine, a record number of tight end prospects (22) and the fewest number of OL prospects (50) since 2010 have been invited. Here is a look at what to watch with each position group and a few players to keep an eye on:

Quarterbacks
What to watch for:

1.       Who decides to throw
Very often, the top level prospects decline to throw at the NFL Combine, preferring to display their talents with receivers they are more familiar with at their pro days. However, this year’s crop of QBs is very unproven and declining to throw could turn some teams off (as we saw last year with Connor Cook from Mich St). Just who throws and who doesn’t can sway a team’s decision, even though it seems very trivial.
2.       Interview Process
Unfortunately for draftniks, the biggest part of the process in evaluating QBs, the 15 minute personal interviews, is not televised (yet?) and shrouding in mystery. What a team truly thinks about a particular QB is generally determined in these interviews, though sometimes the nature of a player’s interviews can leak out through rumor.
3.       Mitch Trubisky’s height
As the QB from North Carolina, Mitch Trubisky, is generally considered the #1 QB on the board headed into the Combine, he also has the most to lose potentially. One pitfall rumored thus far is that Trubisky is not all of the 6’3” that he was listed at UNC, but in fact may be closer to 6’ even. While this may seem small to some, the smallest of margins can sometimes separate these players and sway a team away from a particular prospect.

Players to watch:
1.       Pat Mahomes, Texas Tech, QB10
Many GMs are wary of QBs coming from the “Air Raid” system as it has proven a difficult transition to the pro game. Mahomes, with a the measurables, pedigree and upside that will intrigue QB-needy teams, will need to show solid mechanics and full grasp of an NFL offense in interviews to keep his name in 1st round contention.
2.       Deshone Kizer, Notre Dame, QB06
Another QB in the 1st round mix, Kizer needs to really impress with his physical skills to overcome a lot of bad tape from his college days. If he can show good accuracy in drills and run well, Kizer could quell some of the naysayers around his prospects.

Running Backs
What to watch for:

1.       40 times
The RBs are always a fun group when it comes to the 40 yard dash as they tend to have a few standouts. While not an indicator of future NFL success (how often do RBs take the handoff from a sprinter’s stance?!), the 40 does get notice from fans and GMs alike and can play a big part on Combine week.
2.       3 cone drill 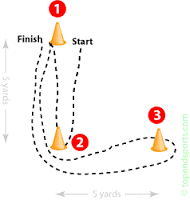 Much more important than the 40 time to a running back’s success is his time in the 3 cone drill. This drill measures bend around a corner, short area burst and agility in space. The cones are laid out in an L shape, the runner starting at one cone. He must run up to the 2nd cone, circle and return to the start then turn, going around the second cone to cone #3, circle it and retrace his steps. Though not always reported, this drill is a big factor in the agility of RB evaluation.

3.       Medicals
In addition to on-field drills, measurements and interviews, each player is exposed to a number of medical evaluations by various teams. As running backs are a group most likely to take punishment in the college and pro ranks, their medical checks are highly scrutinized and vital to their draft position. Though this not shared publicly, rumors of a medical red flag can make their way into the mainstream.

Players to watch:
1.       Alvin Kamara, Tennessee, RB16
Kamara has been on many draft boards as the 3rd or 4th best RB in the class despite only 1 year as a starter at Tennessee. Though he has some past character and medical red flags, an extra good showing at the Combine could get him into the late 1st round mix.
2.       Samaje Perine, Oklahoma, RB23
With fellow Sooner RB Joe Mixon barred from participating from the Combine, Perine needs to use this opportunity to distinguish himself to get into the middle of the pack of RBs in this class. His success running and catching the football in drills will be interesting to watch.

Wide Outs
What to watch for:

1.       The Gauntlet
Easily my favorite drill at the Combine, the Gauntlet can make or break a wide receiver. The player start on the out-of-bounds line facing away from the field. On the signal, returns to his right and catches the pass thrown by a QB then quickly spins 180 degrees to catch another pass thrown. The receiver then begins to run down a yard line, catching 3 passes from alternating sides. On the final throw, he catches the pass along the following sideline then turns upfield to run. This drill emphasizes hands catching as well as movement and taking directions.
2.       40 times
Like the running backs, wide receivers draw a lot of attention around the 40 yard dash. While for many positions the 10 yard split (how fast the player runs the first 10 yards) is more critical than the full 40 time, wide outs can demonstrate a “2nd gear” in their full 40 and thus are judged more on that basis.
3.       Vertical jump
Another measurement taken by most players at the Combine is the vertical jump. And while no one cares how high your center can jump, for wide outs this can be a good measurable in showing if a player “plays bigger” than his size in jump ball situations.

Players to watch:
1.       John Ross, Washington, WO42
Despite having a shoulder injury that will require surgery, Ross is choosing to participate in the Combine. Much of this is due to his desire to run the 40 and show his elite speed. If Ross runs a blazing time he will definitely be in the 1st round mix just behind Corey Davis and Mike Williams.
2.       Malachi Dupree, LSU, WO13
Without great QB play at LSU, Dupree only had opportunity to flash his potential on occasion. But at the Combine, Dupree will have a chance to really show what he has and potentially be the 4th or 5th WO off the board.

Tight Ends
What to Watch:

1.       Pass catching drills
This year’s crop of tight ends is heavy on pass catchers versus blockers and watching them run drill should be a treat. Their fluidity to move in space and come up with the ball will be on full display.
2.       Bench Press
Unlike wide outs, however, tight ends are often covered by linebackers or safeties and will be in press coverage or chipped by defensive ends. Functionally strength as measured by reps of 225lbs is as important as catching passes.
3.       Blocking drills
Like the bench press, a tight ends ability to hold up at the point of attack in the run game is also critical to NFL success. Though many in this class might be better in space, their ability to be at least functional blockers must be part of the evaluation.

Players to watch:
1.       Evan Engram, Ole Miss, TE05
Emgram has drawn many comparisons to the Redskins’ Jordan Reed and he will have to live up to that hype at the Combine. Strength, speed and agility will all be measured and look for Engram to be one of the stars of this group.
2.       Jonnu Smith, Florida International, TE18

Smith really put himself on the draft world map at the Senior Bowl in Mobile and will look to keep that momentum going in Indy. As one of the few “all-purpose” tight ends in this class, Smith should excel in both blocking and pass catching drills.

Part 2 of our Combine preview will include the OL, DE, LB and DB spots