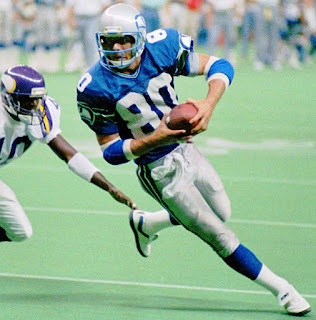 2015 turned out to be a transitional year for the Seahawks, turning from a run-first offense to a team keyed by Russell Wilson’s play-making ability. Losing Marshawn Lynch and Jimmy Graham, a shuffling O-line and attrition on defense did not allow the team to repeat as Super Bowl participants for the 3rd time. But a return trip to the playoffs at 10-6 and a 1st round miracle victory versus the Vikings was still a solid year and has the Seahawks hoping to return to the Big Game again in 2016.

After a rough start in 2015 due to injuries, hold outs and chemistry issues, the Seahawks bounced back from 2-4 to finish 10-6 and gain a wildcard spot in the NFC. Under the steady hand of Pete Carroll and the newly married Russell Wilson, the Seahawks will look for more answers this season for an offense with even more question marks.

One place not is question is the starting QB spot. Russell Wilson showed that he was more than just a bus driver in 2015, leading the league with a 110.1 QB Rating. Becoming the focal point of the offense, Wilson will need to stay just as excellent and as healthy for the Hawks to be contenders in 2016. Behind Wilson is undrafted rookie Trevone Boykin out of TCU and untested 2nd year player Jake Heaps. Hardly an insurance policy against injury.

Thomas Rawls emerged last season as the heir apparent to the now retired Marshawn Lynch until a broken leg ended his season in 2015. Rawls starts camp on the PUP list but looks to be back by opening day. Behind him the Seahawks had some success with former castoff Christine Michael, who has seemed to finally matured into his potential. In addition, the Seahawks drafted 3 RBs, CJ Prosise out of Notre Dame, Alex Collins of Arkanasa and Zac Brooks of Clemson. Prosise, a converted WR, will likely nail down the 3rd down back roll and Collins will be the change of pace back if he can stay healthy.

Golden Tate left prior to the 2015 season making Doug Baldwin the #1 option at WR. In addition, Jermaine Kearse, Paul Richardson and the speedy Tyler Lockett formed a very solid foursome. Lockett will likely be a breakout star in 2016 building on his rookie season. At tight end, Jimmy Graham was lost in Week 12 last year to a torn patellar tendon and may start 2016 on the PUP list. That injury is very tough to recover from and may make Graham, who already struggled to fit into Bevell’s system previously, mostly a non-factor this season. In his stead, the Seahawks drafted Ohio St TE Nick Vannett to pair with Luke Wilson. Vannett is a solid blocker with the athletic potential to be a better weapon than he showed in college.

Perhaps no bigger question faces the 2016 Seahawks than the offensive line. Gone was stalwart LT Russell Okung via free agency. In his place, the versatile Garry Gilliam has switched from right to left tackle. On the other side is a competition between free agents J’Marcus Webb, Bradley Sowell and rookies Germain Ifedi and George Fant. This is hardly a group that inspires confidence though that could be said of last year’s 3rd best run unit too. At guard, Mark Glowinski should start on the left side, with the right side likely being one of the losers for the RT spot (Ifedi or Webb) or rookie 3rd round pick Rees Odhiambo (UPDATE: The Hawks signed Jahri Evans on Aug 6th at RG). The center will be former guard Justin Britt, one of the bright spots on the line last year. How this group gels in training camp and in the early part of the year is key to their success this season.

Overall, Darrell Bevell’s system has proven it can overcome a lot of challenges and still be a Top 5 offense, thanks to the playmaking of Russell Wilson. If Rawls can come back healthy and the OL can be decent, the Seahawks should have a playoff quality offense again in 2016.

The Seahawks finished with the 2nd ranked defense in 2015 and 1st in points allowed. With the return of Kam Chancellor after a holdout early in 2015, the Seahawks continued their dominate ways with the Legion of Boom secondary and a dynamic pass rush. The 2016 team has a few holes to fill but should still be a very dominate unit.

On the D-line, the Seahawks lost run stuffer Brandon Mebane to San Diego but replaced him with 2nd round pick Jarran Reed out of Alabama and FA Sealver SIliga from New England. With incumbent DTs Jordan Hill and Ahtyba Rubin the Seattle run defense is stout. On the edge, the controversial Michael Bennett mans the left side. On the right side is Cliff Avril with Frank Clark also pushing for time. The D-line should remain as solid as ever given health in 2016.

The Linebacking spot took a hit with the loss of pass-rushing specialist Bruce Irvin to Oakland. KJ Wright and Bobby Wagner still make 2/3 of a very solid core but the third spot is in flux. Kevin Pierre-Louis and Michael Morgan will compete for the spot on run downs, but look for DE Frank Clark and CB/S Brandon Browner to both get time there on passing/nickel packages. If DC Kris Richard can be creative, this could be another added wrinkle for opposing OCs to worry about.

The secondary is the strength of the Seahawk D. Richard Sherman, Tharold Simon and Jeremy Lane make up a very solid tandem at CB if they can all stay healthy. At safety, Earl Thomas and Kam Chancellor are still the best safety group in the league. The depth behind them, however, is suspect so they too will need to stay healthy.

Overall, the Seahawks should expect to be a top 5 defense in the league provided their veterans can stay healthy and they can consistently generate enough pressure on the QB. But to go from excellent to elite, they will also need to generate more turnovers than in 2015 (T-18th).

With a lot of injury questions and a pretty brutal division, the Seahawks should still duplicate last year’s win total and make the playoffs as a wildcard. This team could be one in which it is better to face them earlier in the season than later as they gel and find answers at various positions. And, of course, don’t forget that home field advantage.