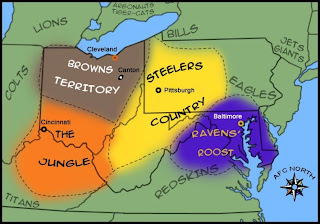 This division begins with the defending Super Bowl Champs: The Baltimore Ravens. But with stalwarts like Ray Lewis and Ed Reed gone, Joe Flacco has to assume the mantle of leadership.  The Cincinnati Bengals are a young team on the rise looking to dethrone the champs. The Pittsburgh Steelers appear to be a team on decline and the Cleveland Browns...well they're the Browns.

The Baltimore Ravens went just 10-6 last year but had a magical run to the Super Bowl. In addition to Ray Lewis and Ed Reed leaving, The Ravens also traded WR A Boldin this offseason. The coup of  adding OLB Elvis Dumervil plus another good draft should have the Ravens in contention, however.
Cincinnati Bengals also finished 10-6 and lost to Houston in the playoffs. They added some key veterans, had a great draft again and are looking for a division title.
Pittsburgh Steelers slipped to  8-8 and lost WR Mike Wallace, OLB James Harrison and RB Rashard Mendenhall. Big Ben will have to shoulder the load to return the Steelers to the postseason.
Cleveland Browns finished 5-11 and cleaned house. New coach Rob Chudzinski from Carolina has a team of young and hopefully emerging talent on offense and is switching back to a 3-4 defense, adding OLB Paul Kruger and OLB Barkevious Mingo in the draft.
Baltimore Ravens

They are the defending Super Bowl Champs. I feel they have the best front office in the NFL. They never overspend in Free Agency and they let the draft fall to them. They never panic. After the Super victory they rewarded Joe Flacco with a 6 year 120 mill deal. Ray Rice is still a beast (once they remembered to use him last year) with 9 TDs and 1143 yards last season. They cut FB Vonta Leach and because most of the NFL does not use fullbacks anymore they resigned him. I fell their passing game will be greatly impacted by the trade of WR Anquan Boldin and they loss of TE Dennis Pitta for the season in training camp.  WR Torrey Smith still seems like a 9 route runner only. On the Ravens O-Line, you must always worry if this is the year LT Bryant McKinnie drops off in a hurry. They have a lot of quality youth on the line at the other positions though. They were middle of the pack in total offense but top 5 in the red zone where it matters.
The Ravens defense is having a over haul. Gone are future Hall of Famers Ray Lewis and Ed Reed. In are Elvis Dumervil, and former Cowboys Chris Canty & Marcus Spears. Everyone seems to praise the Ravens defense but they don't really do anything that well. They were middle of the pack in total defense, sacks and INTs. They are replacing their linebacking corp with 2nd round pick Arthur Brown and Dumervil. The Ravens secondary will be enhanced by 1st round pick FS Matt Elam. Another Ravens coup of the draft as they let the board come to them.
I liked the first 4 picks of their draft Elam, Brown, Williams and John Simon. the rest of the draft  was weak on paper but who am I to question the greatness of Ozzie Newsome. Vegas does not see them repeating as they have an 8.5 over under total win line and 40-1 odds of returning to the Su[per Bowl. Of Course you take Ray Rice early but if Ed Dickson is there in say round 10, take him to see if he can fill the loss of Dennis Pita in FFL.
Cincinnati Bengals 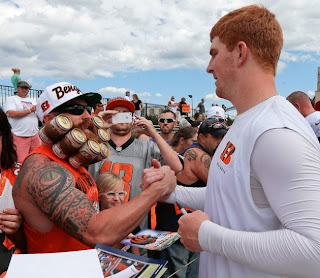 The Bengals made the playoffs again but many questions surround Andy Dalton. He threw for 27 TDs and 16 INTs but does he have the "it" factor that will take the Bengals to the Super Bowl? The Law firm (RB Benjarvis Green-Ellis) had a solid year but the Bengals wanted to upgrade. RB Giovanni Bernard out of UNC has home run threat when he touches the ball thus the Bengals spent a high 2nd round pick on him. Of course WR A.J Green is an elite wide out, 97 catches 1350 yards and 11 TDs last year but the 2nd wide out is a question mark. Mohamed Sanu is the prime candidate for that spot, coming off of injury last year. They selected TE Tyler Eifert in the first round, a guy who I loved in the draft process, so look for a lot of 2 tight end sets. TE Jermaine Gresham had a decent year with 64 catches and 5 TDs but has not lived up to his hype yet. Their young O-line improved through out the season. The center position will be a "Hard Knocks" battle to see who is victorious.
The Cincy defense is an elite defense in the NFL. Lead by DT Geno Atkins and the franchise tagged DE Michael Johnson, they helped the defense to 51 sacks last season. Somewhere Cowboy fans are crying after letting Def Cord Mike Zimmer go several years ago.  LB Vontaze Burfict, who went undrafted for a variety of off-field reasons, exploded on the scene last year and lead the team in tackles. Marvin Lewis is loyal and resigned Rey Maualuga at middle linebacker, who's off the field actions are more celebrated then his on the field play. Their secondary features a bunch of Dallas Cowboy rejects in CBs Terrance Newman and Pacman Jones. They are not a ball hawking secondary though as they had 14 INTs last year.
I thought they had a great draft again. The Bengals went all in to continue to help out Andy Dalton. FFL Fans take a late round flier on RB/KR Rex Burkhead, as he will get goal line looks.  Vegas seems lukewarm on the Bengals with an 8.5 total wins in over/under and 30-1 Super Bowl Odds.
Pittsburgh Steelers

The Steelers were 8-8 last season and lost a ton of free agents this off season.  Is the decline of Ben Roethlisberger upon us at age 31? The man takes a beating and it will take a toll one day. Ben was having a stellar year before the shoulder injury. He still threw for 26 TDs and only 8 INTs. OC Todd Haley's system looks as though it is working . . . for now. They drafted Landry Jones out of OU as their new back up QB. If he sees extended action at all this season it will be a LONG year in Steeler Country.They will have a new starting Running Back in Le'Veon Bell out of Michigan State after they let the oft injured and knuckle head Rashard Mendenhall walk in free agency.  Their wide receiver corp is suspect. They let Mike Wallace leave and are left with Antonio Brown and Emmanuel Sanders, who the Pats tried to poach in restricted free agency. They drafted Markus Wheaton out of Oregon State in the 4th round to make a push for the 3rd wide out spot. The offensive line has several question marks. Stud center Maurkice Pouncey and RG David Decastro are very good but both Tackle positions have questions.
As usual, The Steelers have a top notch overall Defense, in fact they were number 1 last year. That said they don't force INTs (10 total) and they don't get after the QB very well with only 37 sacks.  The defensive line must have its young high draft picks in Ziggy Hood and Cameron Heyward step up this season. The line backing corps will have 2 fresh faces as James Harrison was a Salary Cap dump. Former 2nd round pick Jason Worilds will step in for Harrison. The Steelers were ecstatic when the Georgia sack artist Jarvis Jones fell in their lap at 18, though how his game translate to the pros will be interesting to watch. The secondary is solid. The questions are at safety with the oft injured Troy Polamalu and the aging Ryan Clark. They drafted the short but powerful Shamarko Thomas to help out.
The Steelers had a good draft outside of Landry Jones. They stayed patient as usual and let the draft fall to them. They are a very trendy pick in Vegas with 9 total wins on the over/under and 20-1 odds are getting to the Super Bowl. My fantasy tips stay away from TE Heath Miller and pick up Le'von Bell in the mid rounds.
Cleveland Browns 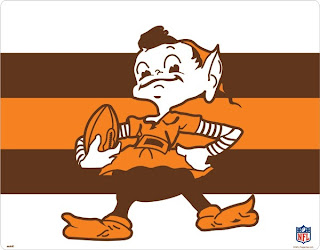 The  Browns... they are the worst franchise in the NFL since their expansion debut in 1999. Is there hope in the future??? No!! The new owner is under an F.B.I investigation, their QB might lose out to Jason Campbell and their emerging wide out Josh Gordon will miss 2 games for drugs. The bright side is RB Trent Richardson and LT Joe Thomas. Shocking the Brown have had a coaching and GM change...again. They brought in Rob Chudzinski as the Head Coach and Norv Turner as Off Cord. They will run the ball and throw it deep. If he can stay healthy, Richardson should have a monster year and be a 1st round Fantasy lock.  The QB situation is a disaster but I'll give 29 year old Brandon Weeden another chance to shine. They made a solid trade by getting WR Devon Bess in the slot. On a positive note, I like their O-Line. Thomas and Mack would be house hold names in the NFL fan base minds if the team was not awful, though the guard spots still have question marks.
On Defense, they will switch back to a 3-4. This could be disaster. They were 23rd in total defense last season. Now most of the players have to learn new roles. The 3-4 scheme is based on what linebackers can do. They drafted Barkevious Mingo out of LSU with the 6th overall pick. He can get after the QB but might be too light, 237 pounds, to stop the run. I like Jabaal Sheard but he had 7 sacks as a 4-3 def end.  Will he transition?? The Browns secondary is suspect. Joe Haden is a beast but also 1 strike away from a year suspension. They drafted Leon McFadden in the 3rd round at corner back.  TJ Ward at safety is great on the run but had only 1 sack and 1 Int. Can you say Roy Williams Cowboy Fans? Cleveland def. was almost top 10 in INTs and sacks, 11th at both. I like the free agent addition of Desmond Bryant at DT.
The Browns draft was awful. I liked Mingo and McFadden but they only had 5 picks!! This is not acceptable for a rebuilding team. I realized they used their 2nd rounder on Josh Gordon during the Supplemental draft. This team needs players and should have traded down often to acquire more picks. Vegas has little to no faith in the Browns with 6 wins in the over/under and 60-1 odds at the Super Bowl. Outside of Richardson, might take a late rounder flier on Greg Little in Fantasy.
Posted by Unknown at 9:57 AM